Click on any genuine Iolite Jewelry image below to enlarge it.

These 14k yellow gold stud earrings are set with fine quality 9mm round faceted natural iolite gemstones. They face up with beautiful medium blue-violet natural color - they are not heated or treated in any way. These natural iolite gems face up completely clean, and they have very faint natural inclusions visible only under very close inspection with bright illumination (GIA: Type II Gems, Clarity Grade: VVS). They are very well cut from natural iolite rough that was mined in Tanzania.

This pair of beautiful iolite earrings is set in 14k white gold studs with oval faceted natural iolite gemstones. These iolite gems have fine dark blue-violet color (100% natural color - not heated or treated in any way). The fine quality gems in this pair of natural iolite earrings face up completely clean, and they have very faint natural inclusions visible only under very close inspection with bright illumination (GIA: Type II Gems, Clarity Grade: VVS). They were very well cut from natural iolite rough that was mined in India.

This 14k white gold iolite pendant was set with an 8.1mm round faceted iolite gemstone. This lightly included iolite gem faces up clean with beautiful medium dark blue-violet natural color - this gem has not heated or treated in any wa). It is very well cut, and looks like a much more expensive tanzanite!

Code: iolj170
Genuine iolite ring with a 3.88 carat iolite gem, 0.24carats T.Wt. red spinels
This fine iolite ring is a ring size 7
Set with a genuine iolite gemstone
Price: $1128.00
This finely crafted 14k rose gold ring is set with a fine quality 12.0 x 10.0mm oval cut genuine blue iolite (cordierite) gemstone weighing 3.88carats and with 6 round brilliant cut red spinels weighing 0.24 carats in total weight. This fine quality blue iolite gem was faceted from a gem-grade crystal in Thailand. This iolite gem faces up clean completely clean to the un-aided eye with miner inclusions visible only with magnification and bright illumination. It was well cut in Thailand and has lovely deep purple-blue color. See also a side view of this natural color iolite with red spinel jewelry design. See also another view of this natural color iolite with red spinel ring design. This solid 14k rose gold, iolite and spinel ring weighs over 5 grams and is a ring size 7.

This 14k white gold iolite pendant is set with a large oval faceted iolite gemstone weighing 4.59 carats. This fine quality iolite gem faces up completely eye clean, and it has faint natural inclusions visible only under very close inspection with bright illumination (GIA: Type II Gems, Clarity Grade: VVS). It has very dark fine blue-violet natural color - it has not been heated or treated in any way. See another view of this fine iolite pendant. design. See also a side view of this natural iolite pendant. 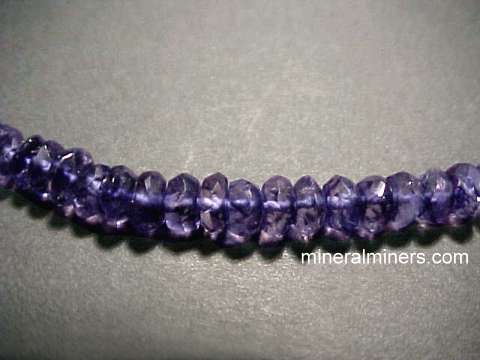 Please see below to order.

Code: iolj110xc
this natural iolite ring is available in ring size 8.5
Price: $56.95
This sterling silver iolite ring is handcrafted with an open back and set with a lightly included 10x8mm oval cabochon gem of natural iolite with beautiful deep blue-violet color (100% natural color - not heated or treated in any way).

Code: iolj177
Natural iolite faceted beads weigh 5 carats total weight for the pair
Each earring is one inch long
Price: $54.95 (for the pair)
This handcrafted pair of 925 sterling silver hessonite earrings is set with transparent 5.5mm faceted beads of natural iolite with beautiful blue-violet natural color. These superior grade iolite beads are gem quality! They were handcrafted from natural color iolite rough that was mined in India.

You can see our entire inventory of baroque Gemstone Bead Necklaces available in a wide variety of natural gem materials.

Be sure to see our Iolite Gemstones page.

Iolite is another name for the mineral cordierite. Transparent specimens of iolite can show strong pleochrism with blue-violet colors changing to nearly colorless as you turn the iolite in different directions.

Be sure to see our Iolite Gemstones page.

We have iolite gemstones that were mined in tanzania and also some from India.

Our selection of iolite rough specimens also were mined at these same locations.

See our natural color iolite spheres and iolite linghams. They were handcrafted from large pieces of natural iolite rough that was found in India.
To see more iolite photos, just select another item category from the table below.

To see photos of another mineral variety, select any item category link in our Mineral Inventory & Factsheet Index.


Would you like us to inform you when we add more natural iolite jewelry pendants and iolite earrings in 14k white gold and 14k yellow gold, as well as natural iolite bead necklaces?
We have over 150 tons of gem & mineral items in stock at our mineral warehouses, so be sure to let us know if you have any iolite jewelry special requests. Please contact our webmaster or our 'site' geologist with any questions or comments regarding our genuine iolite jewelry.

Go up to the top of this iolite jewelry page:
Iolite pendants, iolite earrings, and iolite necklaces